The wonderful story of Aloe

The earliest historical records of Aloe were found on clay tablets from the XV. century BC. These recordings  mention a versatile “wonderplant” which was successfully used for medical purposes. The Aloe plant also appears on painted vases from ancient times, and in ancient Egypt it was regarded as a symbol of eternal life. In the Middle East, many have believed that the sap of the Aloe gave wisdom and immortality. (The Conqueror) Alexander the Great (330 BC) has also used it effectively to nourish his soldiers and heal their wounds. In the interest of possessing the Aloe plant – a recommendation of Aristotle –, he occupied Socotra Island.

The Phoenicians dried the plant and the powder was exported to the Greco-Roman Empire. One of the forerunners of Roman medicine, Celsius (first century BC) also extolled the values of Aloe.

We also find references to aloe in the sacred books of the Old Testament (eg, The Song of Songs 4:11-14) and in the New Testament (John 19:39),. There exists a letter written by Count Istvan Bercsényi, in which he rendered thanks to his confessor (Banfi G. Noble Abbot), from whom he received an aloe plant that had cured him from “lupus disease of the foot” (leg ulcer).

In early civilizations it was known under various names. Supposedly it was discovered in Africa and it spread out over time from there. Today, the plant is known as Aloe Barbadensis Miller (named after a botanist called Miller) and Aloe Vera (the “true aloe”, according to its Latin meaning).
The Aloe Vera belongs to the lily family. It has a rosette of long, thick, spiky leaves similar to that of cacti, which in tropical and subtropical areas under natural conditions can reach 75 to 120 cm tall. The leaves have small spikes on both sides.

The top layer forms a protective layer which filters air and water. Under the top membrane is a cellulose skin tissue containing aloin, and inside that a gel with curative properties that make it the most valuable part of the plant. There are about 400 species of aloe in the world, but only a few have medical properties (eg.: FERROX Aloe, Aloe arborescens, aloe Cap and Aloe Vera). For medical use, the best and most popular kind is the Aloe Vera ( also known as Aloe Barbadensis Miller). 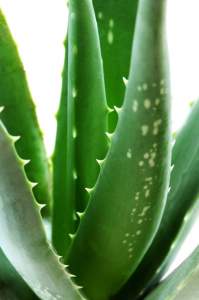 The beneficial effects of Aloe Vera:

Conducted studies prove that this wonderful plant has many known, as well as still unknown virtues, and it will continue to keep surprising us. There are numerous dedicated experts and advocates of Aloe in the United States, Japan, Russia, China.
For a long time, people used it only in powder form (because of the aloin located in the top leaf) as a laxative and an anthelmintic In the producing countries, the sap of the leaf (the gel inside the leaf) is applied as first aid to daily home injuries (eg. cuts, burns) and problems (eg. anti-inflammatory, helping digestion, skin care).